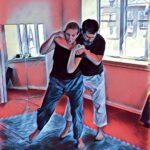 "the troops advanced on the capital"

"our knowledge is advancing all the time"

"the rebels' advance on Madrid was well underway"

"an effort to combat drug trafficking"

Similar: fight; battle against; do battle with; wage war against; resist

I would define “combative theory” as any martial art, sport, training course, skill or drill whose purpose is to train a person in the art of self defense, the defense of others, or to survive an otherwise atypical event occurring, which would be harmful to a person or persons within a society. This could include certain military or paramilitary training.

This definition is important to me in teaching karate. It speaks to me of the importance of keeping your ability in perspective. We as a species start to see ourselves as experts in the myriad of things we experience, and to some degree this is true, but this is not an article to argue what makes an expert. In fact, it may be quite the opposite regarding what we consider to be the ability to defend ourselves after receiving training to do just that.

Arguably, I am an expert at Karate. Question is, am I an expert at self defense? I hold a 6th Degree Black Belt in Goju Ryu (style of) Karate. I have been practicing for a little over three decades and have practiced an untold number of scenarios wherein I protect myself from attack. Furthermore, I was a soldier. An Army Medic having served 22 years. One of the duties I was charged with was the defence of medical facilities and patients in a theatre of operations. I left service at the rank of Master Warrant Officer, and would be considered by many, as an expert at my trade. This included in my case being qualified as a Range Conducting Officer for small arms such as pistol, semi automatic assault rifle, grenades and pyrotechnics.

But what does this all mean when we are talking about being in a street fight, tavern brawl, or even the all too frequent riots happening in the world, let alone being the victim of unlawful activity. How does my experience translate into expertise at self defence? It doesn't.

I consider myself an expert in combative theory. I was never deployed to a combat zone and  I have been in very few real fights. One or two in High school and the same while in military service (which were fueled by youth and alcohol consumption) and these were before I started learning karate. I also have some competitive kumite (sport fighting) experience where the outcome is not life, death or injury.

On the plus side, several of the soldiers I trained, and trained with, were deployed and saw combat action and survived. When speaking with them of their experiences, they credited the endless training drills as the reason they survived. They described it as being on autopilot. So I guess the theories regarding military training are likely sound. Likewise there are many stories where self defense knowledge has saved lives and so, without being able to qualify which ones specifically, some self defence theories are sound as well. However, what you cannot count on until you have been in the exact situation you have been training for is, quite frankly, you. You do not know 100% how you are going to react nor what variables will be presented to you to prepare yourself at the time.

What you really get from all the training and preparation is an (incalculable) increased probability of survival. Certainly not a guarantee. There are several other factors which will directly affect probable outcomes (both negative and positive).  Some I can think to list would include, aggression(or lack thereof), anger, fear, panic, indecision and disorientation. Anger can blind you to possible courses of action, whereas fear, panic and indecision can be mitigated by the training. Aggression is also capable of being trained into your responses and if done correctly can be applied in varying degrees. However, it is directly affected by the other factors listed and could, without proper understanding (and training) of its use, undermine your purpose. One simply needs to look at the state of policing and see the negative effects it can have.

I have had experience with improperly used aggression by some of my coworkers in the past. I spent a few years working in area hospital security departments and can say that in this setting is where I had put most of my newfound training to use. It was in my job description. “Responsible for the Safety and Security of Patients, Staff, and Visitors”. I needed to know how and when to enforce the Trespass to Property Act, my responsibilities under the Mental Health Act and the Criminal Code of Canada. Often I was dealing with non compliant and compromised persons, who deserved to be treated with respect, but often were not, due to at the time, a complete lack of training and education in the security field.

In the absence of knowledge, anger and aggression were often the “go to” for dealing with situations and almost always made them worse than they needed to be. Thankfully now, there is more education and training for these types of situations though there is still lots of room for improvement.  The hard part as I see it is finding the balance in being aggressive in doing your job or in defending yourself without it having a negative impact on the outcome, and leave you (and/or your charge) safe.

It is impossible to teach experience. You only get experience having been or continuing to be in the situations where your combative theories will be put to use.  Certainly anyone not so employed is not (or should not) be going out to put themselves in harms way. So for most of us, expertise at self defense is not something we will want to acquire in our lifetime, but it is something that we can prepare ourselves for in some capacity through the practice of its theory. 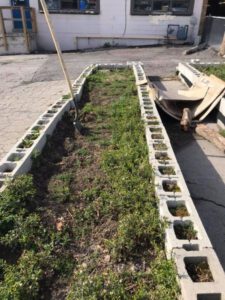 Advance Combative Theories is supporting The Hamilton Dream Centre by planting and maintaining the raised garden you see when coming to the back parking lot. This garden is used each year to help The Dream Centre feed the community and we are excited to be able to help.
If anyone is interested in doing some gardening by helping plant and maintain the vegetables, you are welcome to do so. Contact Sensei Lucy to 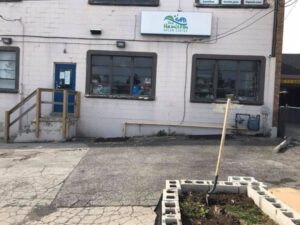 I was thinking what a great mural the back of the building would be!